AV Nodal Reentrant Tachycardia (AVNRT) is an arrhythmia caused by dual AV nodal pathways (one slow and one fast conduction route that enters the AV node). The fast tract has rapid conduction speeds with a longer refractory period, while the slow tract has slower conduction speeds with a shorter refractory period. During sinus rhythm, both pathways are activated, but the fast pathway makes it through the AV node quicker, activating the His bundle and simultaneously retrogradely entering the slow pathway, preventing it from having any further effect (Figure 1). 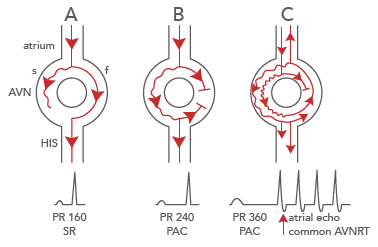 When the slow pathway carries the impulse through the AV node, it propagates into the His bundle but near-simultaneously, also retrogradely loops up and out of the AV node into the atria via the fast pathway because it has recovered from its refractory state. Once the electrical activation of the atria begins, the atrial impulse can now “reenter” the AV node via the slow pathway, perpetuating the process (Figure 1, right image).

During AVNRT, the ECG will show a retrograde P-wave tightly associated with the terminal portion of the QRS.

Often one can see the retrograde P-wave at the terminal end of the QRS as shown in each of the examples below. Termination of AVNRT typically occurs when there is increased vagal tone that slows conduction through the AV node in both directions.

When AVNRT terminates, it classically terminates with a retrograde P-wave but not always because the slow pathway is more prone to be the place of block.

That said, on rare occasion, especially in elderly individuals, the re-entrant loop can terminate retrogradely in the fast pathway.

Finally, although AVNRT is usually triggered by a PAC or a short run of AT, on relatively rare occasion, AVNRT can be triggered and terminated with PVCs or VT. Under these circumstances, initiation and termination of AVNRT essentially mirrors the mechanism discussed for PACs.

* In very rare circumstances, AVNRT can occur in brief periods where 1:1 conduction is not apparent as a consequence of antegrade block before, within or after the His bundle despite perpetuation of the re-entrant loop.

33-year-old female with a long history of palpitations heretofore not diagnosed. The following three strips show onset, maintenance, and offset of one of the 12 episodes experienced.

AVNRT onset. The R-R plot to the left is used to demonstrate the change in the heart rate pattern from sinus to AVNRT where there is a jump in heart rate of ~100 bpm. After ~2 minutes of AVNRT, the R-R plot shows a return to NSR. The two red dots in the middle of the R-R plot show when the patient pushed her button, indicating her perception of an arrhythmia before for the 40-minute period. The near-field view shows the transition from sinus rhythm followed by the PAC with a prolonged PR interval. Following the PAC, there is a transition into AVNRT with a retrograde P-wave seen at the terminus of QRS.

This strip shows the fastest area of this run of AVNRT.

Below, AVNRT offset is ending with a retrograde P-wave (blue arrow) and the return of sinus rhythm.

64 year-old male with a long-standing history of palpitations

This run of AVNRT begins after a 4-beat run of AT. The R-R plot shows an abrupt change in heart rate. The near field view (8-second ECG tracing) depicts sinus rhythm followed by AT with the last ectopic atrial beat landing immediately before the last QRS of the AT run. This last atrial beat led to a long PR and then the first echo beat and a clear inverted retrograde P-wave at the end of the QRS.

This strip shows the continuation of the previous AVNRT onset strip.

This strip shows the termination of AVNRT. First, notice the sudden change in the R-R rate pattern. On the ECG tracing, a PVC couplet retrogradely enters the AV node, thereby interrupting the re-entrant loop with a return to sinus rhythm.

63-year-old female with a history of tachycardia.

In this strip, the R-R plot shows the sudden increase in heart rate characteristic of the onset of AVNRT. Note that it is not a fixed rate but changes over time. This is also characteristic of AVNRT; it rarely is a constant rate. The red dot on the R-R plot shows that the patient became aware of the arrhythmia about one minute after it started. Onset of AVNRT is a consequence of a 4-beat run of AT. After AVNRT onset, there is a change in P-wave placement to behind the QRS complexes. Unlike the example in Case #2, the retrograde P-wave is a modest distortion of the terminus of the QRS with a slight upward vector. Whether this retrograde P-wave is positive or negative will depend upon the relative location of the patch to the atria and ventricles.

This R-R plot shows a sudden drop in heart rate indicative of AVNRT termination. The 8-second ECG tracing shows consistent retrograde P-waves at the terminus of the QRS. The arrhythmia’s offset is preceded by a single PAC, followed by a 3-beat run of ventricular tachycardia and then a return to sinus rhythm.