The identification of atrial fibrillation (AF) using artificial intelligence (AI), either with medically prescribed ECG monitors or non-prescription devices such as watches, is not to be taken lightly. Little focus has been placed on the cost, anxiety and potential therapeutic consequences of a false positive diagnosis. The potential value of AI in AF diagnostics is not debated here, but if it is to be used, the ECG used to determine the truth set should be capable of sorting AF from its various mimickers. Many current methods are limited by the duration of the ECG and the fidelity of the P-wave as well as by the validation process details. These limitations can lead to misdiagnosis of other arrhythmias with R-R interval variability as AF by the AI engine.​​

Our objective was to build an AI to detect AF with better than 90% sensitivity and 90% specificity capable of identifying the onset and offset of episodic AF events, without conflating other atrial (or ventricular) arrhythmias that mimic AF with R-R interval variability.​

For this work, we built a convolutional neural network (CNN) that would analyze the Carnation Ambulatory Monitor (CAM™) (Bardy Diagnostics, Inc., Seattle, WA) ECG and its associated R-R interval data to produce an AF yes/no output for every half-second of ECG data. Training of the CNN was done with CAM ECG recordings from 1227 patients, 474 with paroxysmal or persistent AF, and 753 without AF. Included in the 753 patients were 148 patients with dense atrial or ventricular ectopy, and both atrial flutter (AFL) and sustained atrial tachycardia (AT) with variable conduction. This distinction is pertinent to diagnostic and therapeutic medical and procedural management, and for assessing stroke risk should these disorders be diagnosed as AF.​

In the validation cohort, there were 58 patients presenting with normal sinus rhythm (NSR), 27 with AFL, 24 with ventricular tachycardia (VT), 9 with atrioventricular blocks (AVB), and all patients exhibited AT. The AI differentiates AF not only from NSR, but also from myriad other arrhythmias, including those that have R-R interval variability such as AFL and AT. Our results were 96.82% sensitive and 99.86% specific with a positive predictivity of 99.79% for detecting 30 seconds of AF or longer.

View the Poster and Video 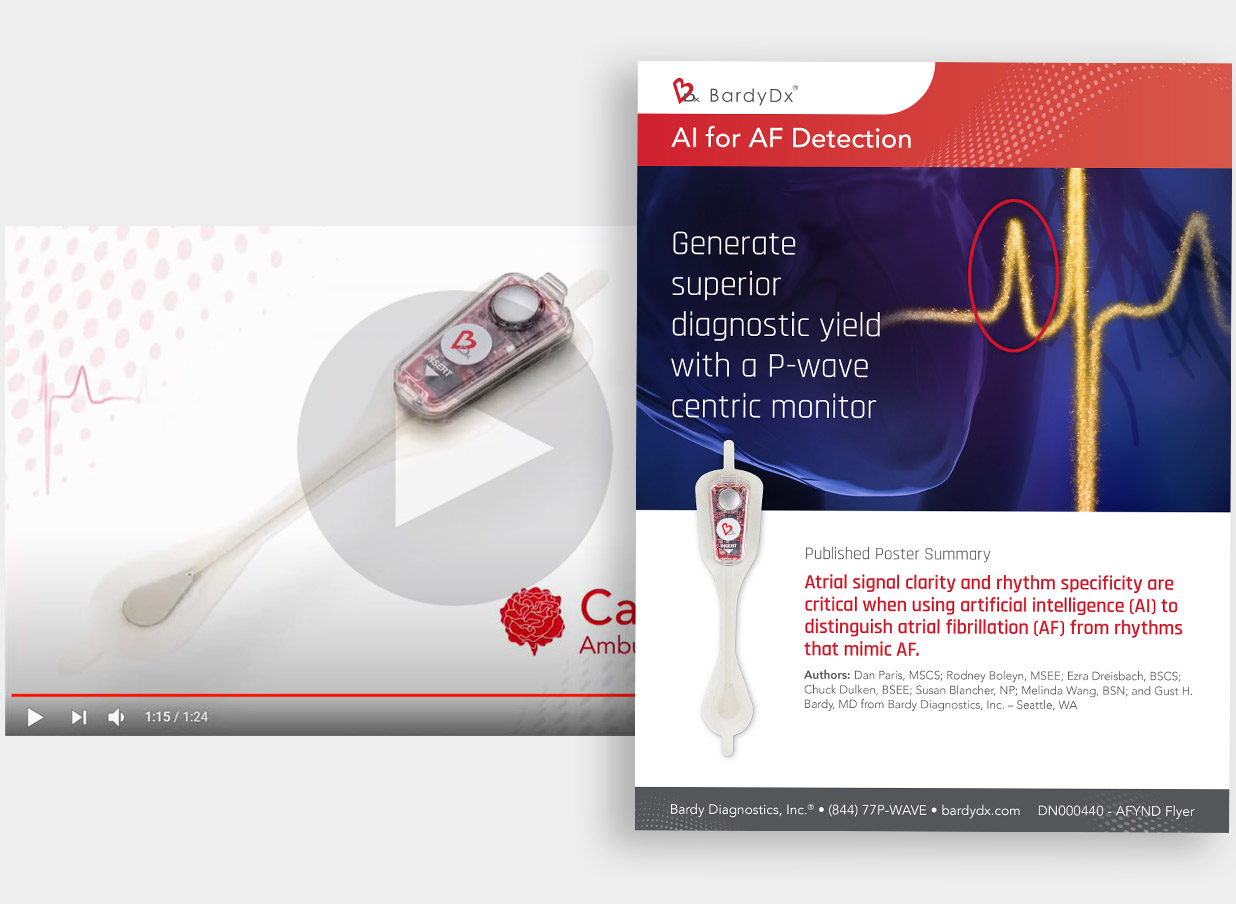 To view the poster and video, please tell us a little about yourself.

BardyDx respects your privacy. The info you provide us is intended for internal use only, and we will not share, sell, or distribute your information. View our privacy policy. By submitting this form, you consent to BardyDx contacting you for purposes of sending you educational information and news about BardyDx products and services.